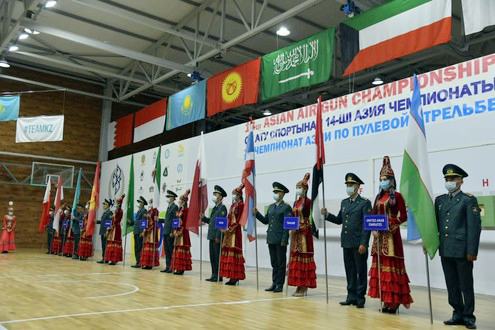 The Asian championship has been launched in Shymkent

On the eve of the 30th anniversary of the Independence of the Republic of Kazakhstan, the Asian Championship in clay pigeon shooting among adults and juniors will be held in Shymkent.

The continental tournament, scheduled for September 10-20, is organized with the support of the Asian Shooting Confederation and the Shooting Federation of Kazakhstan.

Today, the opening ceremony of the XIV Asian Championship was held in Shymkent Shooting Plaza. The meeting was attended by Akim of Shymkent Murat Aitenov and President of the Asian Rifle Confederation Sheikh Salman Al-Sabah, who wished the participants of the competition good luck. Shymkent Shooting Plaza is one of the largest shooting complexes in the Asian region.

Athletes, coaches, and judges participating in competitions received a certificate of negative results of PCR testing, we note that the official delegation, athletes, and participants undergo a PCR test for COVID-19 every 3 days. The tournament is held in compliance with all sanitary standards.

The event was organized by the Ministry of Culture and Sports, the National Olympic Committee of Kazakhstan, and with the support of the Akimat of Shymkent.

Source: The press service of the Akimat of Shymkent city